“Sindh Education City in Karachi is set to become Asia’s largest knowledge creation and education hub. The Government of Sindh is committed to developing a world class learning environment which will provide people an opportunity to study in some of the best Pakistani and foreign colleges, research and develop in state of the laboratories, building linkageswith industry and service providers and leveraging an unparalleled synergy across allstakeholders, unified to build a better world for our future generations. It is a matter of immense privilege for me to be a part of this significant development. I am very pleased to have the opportunity to engage with you through the office of CPBC and I look forward to collaborating with you.” Naheed Memon.

CPBC continues its ongoing interactions with Sindh Board of Investment to see how CPBC can support in promoting various sectors to achieve bilateral interests. In this connection, President Dossal and Chairman Naheed Memon have had various meetings and exchanges to promote Education and Agri-Food related sectors which can bring value to

SBI has strong conviction in the future of Sindh as an economic and energy hub of the region. It believes that the immense economic potential of Sindh requires sustained public-private collaboration and sees for itself a pivotal role in building such a relationship. SBI aims to bring public objectives closer to private aspirations.

The vision of SBI is to develop and promote an investment-friendly environment that boosts economic activity, brings value addition to all sectors of the economy and encourages public-private partnership for the socio-economic development of Sindh.

SBI has also engaged with private sector companies in Pakistan and Abroad resulting in setting up their businesses in Sindh province. To name some of them are: company, for investmentItalian Cement manufacturer in Sindh, Chinese scotch tape producer, a Danish egg pasteurization company, Chinese steel manufacturer, Audi-German Autcompany, UBER and many others.

The wide range of services provided by SBI includes providing information on the opportunities for investment and facilitating companies that are looking for joint venture partners. In this regard, SBI has been successfully inked a number of MoU`s with a number of foreign investors to invest in different sectors of Sindh.

SBI acts as a focal point of contact for prospective investors, both domestic and foreign, and act as a one-stop window to provide all necessary information and assistance in coordinating with other Government Departments/Agencies.

SBI assists companies and investors who intend to invest in Sindh as well as facilitates the implementation and operation of their projects. The wide range of services provided by SBI includes providing info for investment and facilitating companies that are looking for joint venture partners. SBI acts as a focal point of contact for prospective investors, both domestic and foreign, and act as one-stop window to provide all necessary information and assistance in coordinating with other Government Departments/Agencies

Sindh Education City (EC) project is one of the top most priority projects of the  Government of Sindh. The EC is comprised of 8,900 acres in Gaddap town. Twenty local and foreign institutions have been allocated land to develop their academic campuses and some have completed their detailed design to commence construction of their campuses. The Master Plan of EC has been completed and approved by EC  board headed by Honourable Chief Minister Sindh and has been placed within the Karachi City Master Plan. Spatial and administrative governance structure has been setup by the provincial assembly via the Sindh Education City Act 2012. Infrastructure development has begun. The construction of administration enclave is in progress. The detailed Rules & Regulation of EC Act 2013 are being prepared by a renowned law firm, besides Bye-Laws of construction by educational institutes in EC are under preparation.

SBI has initiated the Marble City Project in Karachi that has tremendous investment and growth potential for the entrepreneurs based on high-end industrial knowledge, innovation, and services.  Marble City is planned over 300 acres of land along the Northern bypass. The land has been procured whereas Company with the name of Sindh Stone Development Company (SSDC) is formed under Article 42 of companies            Ordinance for independent, efficient and effective execution of the Project. Topographical Survey and Lease Execution is in progress whereas Boundary Wall is to be constructed after completion of the topographical survey.

SBI signed MoU with Sukkur IBA and IBA Karachi to launch the Entrepreneurship Development Program (EDP) for the promotion of Agriculture in collaboration with the Institute of Business Administration, Karachi (IBA Karachi) and the Sukkur Institute of Business Administration (Sukkur IBA). The project was initiated as a pilot project with an aim to train 300 students. The program was aimed at designing and conducting a program on entrepreneurship along with hands-on training in order to prepare the rural youth of Sindh to develop their capacity to pursue agriculture business in their province.  The pilot project of Entrepreneurship Development has been successfully completed during 2013-14 and shown positive impact on the community. People are getting aware of entrepreneurship and its importance, while a number of businesses and start-ups also increasing. 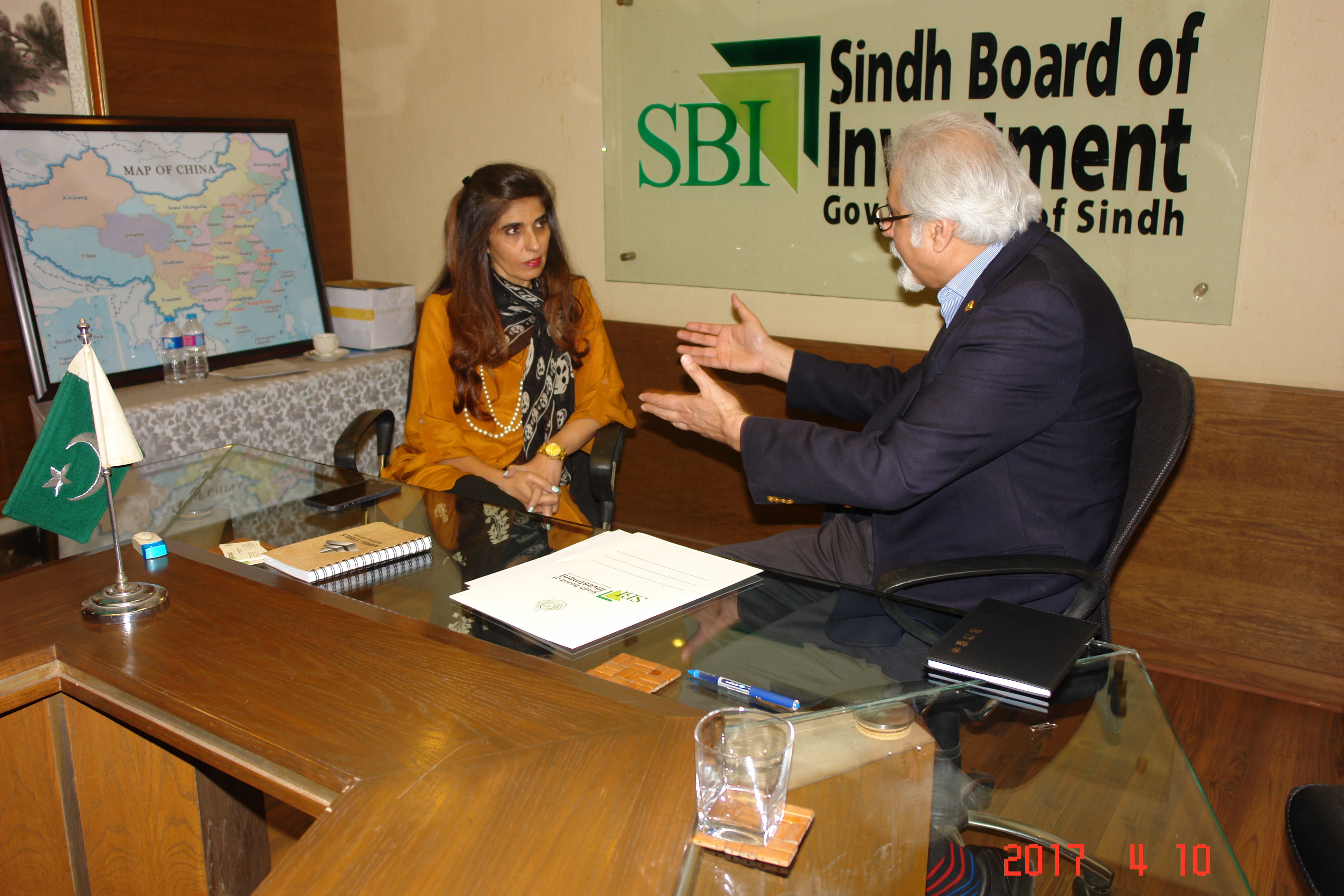 To Market Sindh as Investment Destination

Sindh is the most attractive destination for the domestic and international investor. Sindh Board of Investment, SBI has played a vital role in the promotion of the investor-friendly image of Sindh via its marketing of Sindh strategy. The international conferences, delegations, roadshows are part and parcel of the comprehensive strategy of Sindh Board of Investment’s management.

SBI is aware of present scenario of energy deficit that the country is facing and will   continue to market Sindh as potential destination for projects of Wind, Solar, Coal,  Bio-Gas, Waste to Energy, Tidal, Run of River (RoR) during marketing, our slogan is that solution to energy crises in Pakistan lies in potential of Sindh`s resources. Our massive marketing and vigorous pursuance has caused to land a number of investors to invest in Thar Coar blocks, Coal power plants, Wind, Solar & Run of River and attracted billions of dollars investment in the province. But we are planning to market other areas of energy production resources like Tidal power, Waste to Energy and Bio-gas in future

To promote Information Technology sector of Sindh and bring FDI in this sector via marketing of Sindh to make it potential industry to contribute to National GDP significantly.

To bring FDI and domestic investment in infrastructure development and setting up mega projects in Sindh via marketing strategy in the sectors of transport, road, and bridges

To promote tourism and bring investment to develop tourism resorts in Sindh such as Keenjhar Lake Resorts and Gorakh Hill project.

Sindh Board of Investment comprises of professionals who are striving hard to increase bilateral investment with different countries. We take this opportunity by mentioning one of the Director of Sindh Board of Investment Mr. Abrar Ahmed Shaikh who has served in various administrative positions with the Government of Sindh and has varied experience in various sectors of the economy especially in the areas of Project Management, Energy, Agriculture, Investment Promotion. He is one of the top notch officers available with the Sindh Government. He has complete grasp & knowledge of the job and maintained high standards for the institution.

By CPBC|June 15th, 2017|Delegation|Comments Off on CPBC to Collaborate with Sindh Board of Investment for their endeavours to promote Education and other avenues of common interest for Canada