The Canada Pakistan Business Council celebrated their 32nd Anniversary Gala and Awards Night in an impressive and spectacular event on Monday, 1st June at the elegant Mississauga Convention Centre.

Premier Wynne expected to visit Pakistan at Chief Minister Shahbaz Sharif’s invitation Pakistan the Premier of Ontario, Honourable Kathleen Wynne was the Guest of Honor and key note speaker at this marvelous occasion.  CPBC President Samir Dossal spearheaded an evening which attendees described as “their best ever”.

In addition to the political and government leadership, over 500 leading Pakistani and Canadian society leaders and professional from all walks of life attended the grand event. A ringing endorsement and tribute to the efforts of the CPBC under the leadership of CPBC President Samir Dossal and Chairman Hon. Bryon Wilfert, in being the most effective body for development of trade and business between Canada and Pakistan.  Prominent attendees included senior leaders from Canadian and Pakistani Agriculture, Education; Energy; Infrastructure and Information Technology sectors.

The evening, brilliantly compered by Momin Qureshi and Kim Taylor Galway, commenced with an acknowledgement of the event being hosted in the Territories of the Mississauga Credit Valley, in recognition of our cultural heritage of Canada.

President Samir Dossal, in his highly engaging style, welcomed everyone and shared the activities and achievements of the Council over the last 12 months.  He highlighted the recent successful visit to Pakistan, by a CPBC delegation, under his leadership, comprising Senator Salma Ataullahjan and MPP Dr. Shafiq Qaadri.

A key highlight of the visit was the meeting with the Chief Minister of Punjab, Mr. Shahbaz Sharif to work on the MOU signed between the Governments of Punjab and Ontario. Other visits and meetings included the Speaker of the National Assembly, Mr. Ayaz Sadiq, The Karachi Stock Exchange, The Higher Education Commission, the Board of Investment, Lahore University of Management Sciences, National University of Science and Technology, Sialkot Chamber of Commerce and the Sindh Board of Investment. He stated that the signing of an MOU with the All Pakistan Business Forum, which brings together all business associations of Pakistan under one platform, paved the way for a powerful alliance between two bodies in promoting business and trade between Canada and Pakistan.

9.        Sialkot Chamber of Commerce and Industry

President Dossal shared the efforts of the CPBC, at home in Canada, to reach out to other business Councils, especially Turkey, Sri-Lanka, Afghanistan and India in an effort to collaborate and promote ties between Canada, South Asia and other regions. He also shared his vision of reviving the South Asian Business Council Alliance (SABCA) with an inclusive approach for a larger Canadian Alliance under one platform to collectively work on issues of mutual and common interest in promoting business and trade ties between Canada and their respective countries.

Samir thanked all those who extended their support and help to the CPBC in their work. He thanked Honourable Premier Wynne for her leadership and unqualified support in the promotion of CPBC’s activities. Others equally valuable in their support and leadership were Mr. S.M Muneer of the Trade Development Authority of Pakistan; Mr. Asghar Ali Golo, The Pakistani Consul General and the Pakistani Consulates in Toronto and Montreal and the Pakistani High Commission in Ottawa.  He commended Senator Salma Ataullahjan, who has done sterling work in acting as a bridge between the Pakistani and Canadian Communities,  and MPP Dr. Shafiq Qaadri; Minister Dr. Reza Moridi; Minister Michael Chan; Minister Brad Duguid, Canadian High Commissioner in Pakistan, Heather Cruden, the Brampton Board of Trade and the Directors and Advisors of the Canada Pakistan Business Council. He acknowledged the support of the Ontario Chamber of Commerce (OCC) and the leadership of Allan O’Dette and his team in promoting Ontario Companies abroad.

Chief Minister Shahbaz Sharif, who was unable to attend due to professional exigencies, also sent a special video message in which he invited Premier Wynne along with the CPBC members to visit Pakistan.

He thanked the CPBC and President Samir Dossal for all their work in promoting Canada – Pakistan business and economic ties and shared some of the economic development efforts of the Pakistani Government. He invited Canadian business persons and companies to come visit Pakistan and offered all his help and support to them in establishing and developing business and trade relations with Pakistan.

In her key note address, Honourable Premier Kathleen Wynne congratulated the CPBC and President Samir Dossal on the occasion and clearly endorsed the role of the CPBC as the prime mover, facilitator and “go to” organization for the promotion and development of bilateral business and trade ties between Canada and Pakistan.  She welcomed Chief Minister Shahbaz Sharif’s invitation to visit Pakistan and assured the gathering that she will be visiting Pakistan soon. There is expectation that the visit may take place next year in 2016.

CPBC will be coordinating with the Ontario Ministry of Training, Colleges and Universities, Council of Ontario Universities and similar organizations in Canada, the Higher Education Commission of Pakistan, the National University of Science and Technology(NUST) in collaboration with the Consulate General of Pakistan for this forthcoming visit to be led by Dr. Reza Moridi expected to take place in fall 2015.

Honourable Minister Dr. Reza Moridi, also spoke about his plans for a visit to Pakistan at the Invitation of the National University of Sciences and Technology (NUST). He plans to lead a delegation of academics and representations from Universities and Colleges. Present at the Gala were President and Vice Chancellor, Dr. Mamdouh Shoukri of York University, Mr. David Agnew, President & CEO of SENECA College, Dr. Jack Lightstone, President of Brock University and others.  This large scale presence from Canadian academia was a strong testimony of the interest being generated on this front which CPBC expects to pursue aggressively. CPBC will be coordinating with the Ontario Ministry of Training, Colleges and Universities, Council of Ontario Universities and similar organizations in Canada, the Higher Education Commission of Pakistan, the National University of Science and Technology(NUST) in collaboration with the Consulate General of Pakistan for this forthcoming visit to be led by Dr. Reza Moridi expected to take place in the near future.

Earlier President Samir Dossal highlighted that this engagement was the result of a joint effort by the Ontario Minister of Training, Colleges & Universities, the Consulate General of Pakistan, Toronto and CPBC to develop academic partnerships between Pakistani and Canadian Higher Education Institutions.  During this proposed trip, Dr. Moridi and his delegation of Canadian University Presidents are also expected to meet, engage and sign various cooperation agreements,thereby making an important headway in academic and research collaboration. CPBC will be coordinating with the Ontario Ministry of Training, Colleges and Universities, Council of Ontario Universities and similar organizations in Canada, the Higher Education Commission of Pakistan, the National University of Science and Technology(NUST) in collaboration with the Consulate General of Pakistan for this forthcoming visit to be led by Dr. Reza Moridi expected to take place in fall 2015.

Mr. S.M. Muneer, the Chairman of the Trade Development Authority of Pakistan (TDAP), who had come all the way from Pakistan for the occasion, also spoke very highly of the CPBC and its effective role in promoting Canada Pakistan business ties.  He was especially complimentary of the role of CPBC President Samir Dossal in this regards.  He repeated his offer to be always available to all companies in helping and supporting their efforts in doing trade with Pakistan. CPBC will continue to facilitate any support that is required by Canadian companies.

Earlier Mayor Bonnie Crombie welcomed all the Guests to the City of Mississauga and endorsed the efforts of the CPBC and offered to continue to work together in building bridges and expanding business opportunities.The Consul General of Pakistan

Mr. Asghar Ali Golo, in a short but inspiring address reached out to all communities and urged them to unite for the betterment of everyone.  He also endorsed the efforts and activities of the CPBC and its President in promoting the cause of Canada – Pakistan business ties.  Counsel General Golo highlighted aspects of the 5000 year old Indus Valley civilization in present day Pakistan and the Aga Khan Museum in Toronto which showcases the artistic, intellectual and scientific contributions of Muslim civilizations.

Senator Salma Ataullahjan brought greetings from the Prime Minister of Canada.  She continues to be an ardent supporter of such initiatives by the CPBC and has played a positive role in engaging the community and the government. She was highly acknowledged for her efforts by CPBC President Samir Dossal.

The highlight of the evening was the award ceremony to leaders who through their leadership and work excelled in their fields and played a prominent role in supporting the CPBC and Canada Pakistan trade relations.

CPBC Businessperson of the year 2015 award was given to Mr. Jim Ragas, President of Second Cup International.  Second Cup has recently opened 4 outlets in Pakistan and more are on the way.

The Professional of the Year – Female was awarded to Ms. Aneela Zaib, an outstanding entrepreneur championing the cause of diversity in Canada and providing an opportunity for it Professionals and organizations to connect.

The Professional of the Year – Male was awarded to Dr. Zulfiqar Bhutta, a world renowned authority and thought leader in Child and Maternity care for his exemplary work in the field.

The Humanitarian of the Year Award went to Ms. Sheherazade Hirji, President of the Ismaili Council for Ontario, President and CEO of Canadian Women’s Association, who has spent a lifetime in philanthropic ventures advocating the cause of women.

The proud recipient of the Lifetime Achievement Award for Canada was  Ms. Jennifer Tory, Group Head, Personal and Commercial Banking, RBC. The award was in recognition of her tremendous efforts and advocacy of the rights of the women and visible minorities in the corporate sector.

The Lifetime Achievement Award for Pakistan was given to the incredible Mr. Mushtaq Chhapra, the Chairman and Founder of The Citizen’s Foundation a.k.a as TCF, whose organization has singlehandedly changed the education landscape in Pakistan for the economically and socially deprived. TCF has built 1030 school units in over 109 cities in Pakistan serving the poor and deprived in the rural and urban segments of the Pakistani society.

The Citizens Foundation was also presented with a token donation for their efforts in promoting education in Pakistan. A similar donation is being made to the Rotary Foundation.

The award ceremony was followed by a wonderful dinner during which CPBC welcomed their new sponsors, TWI Foods, National Foods and BDO Canada.

Chairman Bryon Wilfert thanked the Premier for her remarks and acknowledged the active support of the CPBC Board of Directors and Advisors for their continued engagement and the support received by the sponsors for their  confidence reposed in the organization.Presented a special memento to the Premier on behalf of CPBC

CPBC appreciates the support of all its sponsors and patrons.  RBC continues to be CPBC’s flagship Corporate and Event Sponsor ably supported by Mr Imtiaz Seyid;

The evening finally ended with a most entertaining and enjoyable musical program by Tariq Hamid and his group, with the guests swaying to his enchanting melodies.

Highlights of delegation to Pakistan 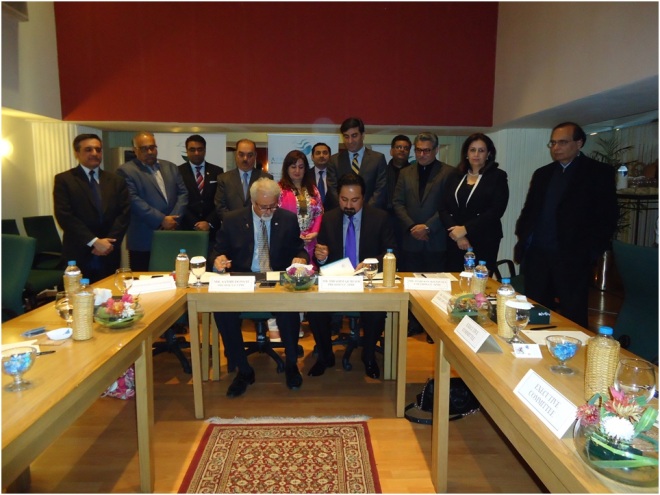 About the Author: Samir Dossal